JD Beach takes a win and a third for Y.E.S./Graves/Yamaha at New Jersey 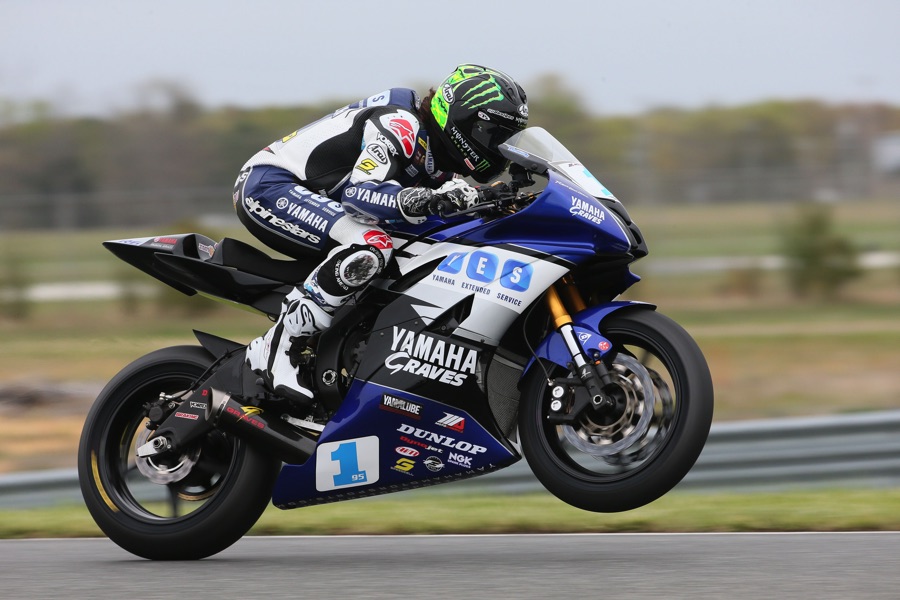 JD got a great start from the third position on the front row while Garrett, starting from second on the grid slotted right in behind JD as both riders got to turn one. JD was determined to keep his #1 Y.E.S./Graves/Yamaha YZF-R6 at the front, despite Garrett making several attempts to put his #31 R6 in the lead. Meanwhile, Wheels In Motion/Meen Yamaha’s Joe Roberts was in third place, and also in hot pursuit of JD and Garrett.

As the race wound down, lapped riders became a factor, with JD slicing through the traffic at perfect moments, while Garrett and Joe were, at times, balked by the backmarkers.

JD crossed the finish line with a gap of over two seconds back to Garrett who, in turn, was a little over two seconds ahead of Joe. All three riders celebrated on the podium as Yamaha enjoyed an R6 sweep.

After his win, JD said, “My plan each race is to get the best start I can. You never know what’s going to happen in the first lap, so I’d rather be out front where it’s clear. My team’s been working hard, and I feel like I’ve been letting them down, so I’m glad to get this win. I’ve been training hard back home, too. Last year, the wins came so easy for me, and this year, it hasn’t been the same, so I’ve been wondering, ‘Can I still do this?’ Winning today feels great.”

The fortunes of JD Beach and Garrett Gerloff were diametrically opposed in Sunday’s MotoAmerica Supersport Race 2. Oil spilled by a crashed motorcycle caused Garrett to fall down and out of the lead, and JD, who was in second place, also went down in the same treacherous turn. JD was unhurt but, unfortunately, Garrett suffered a knee injury that led to a trip to the hospital, where he was examined and released.

The incident led to a red-flag stoppage of the race, followed by a prolonged delay that caused the restart to be shortened to five laps and then moved until after Superbike Race 2. Garrett returned to the track with hopes of making the restart, but he was unable to line up on the grid because of a technicality in the rules. JD soldiered on for the team, and rode a solid and smooth race to cross the finish line in third, enabling him to not only maintain second place in the points standings, but also move to within two points of Garrett’s Championship lead.

After celebrating on the podium, JD said, “Going into the race, with everything that happened today, the crew and I just wanted to finish because we need the points. I tried to race with Valentin, but I had a few ‘moments,’ so I decided to stay where I was at. With Joe (Roberts) going down, I was able to get third, so I’m happy with the result. MotoAmerica did a great job getting the track cleaned up and safe for us to race, so hat’s off to them.”

The Y.E.S./Graves/Yamaha Supersport team will be back in action in two weeks as the MotoAmerica Championship will be at VIRginia international Raceway for the Yamaha Superbike Challenge of Virginia on May 13 – May 15.