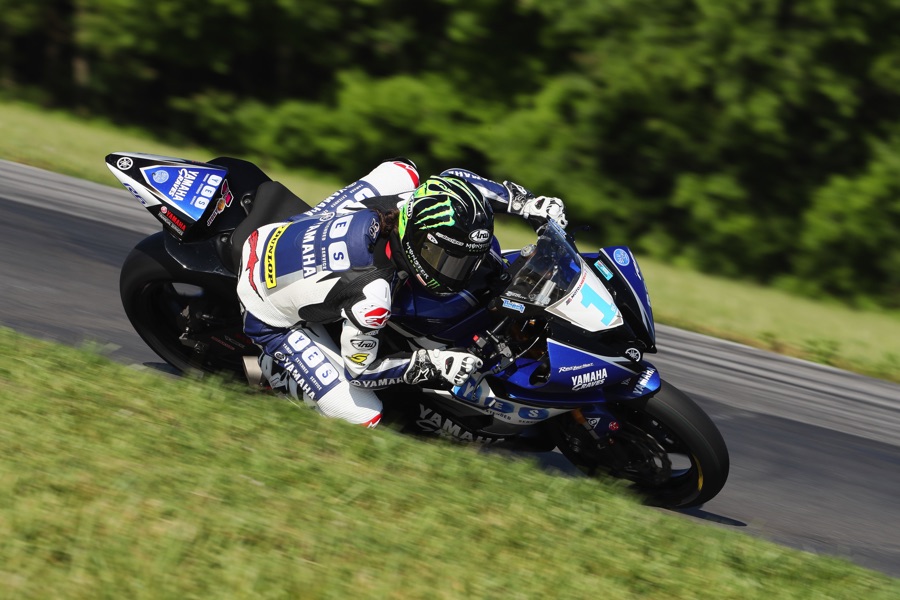 A pre-race burst of rain and high winds created turmoil in the MotoAmerica paddock at VIRginia International Raceway, destroying team canopies and tossing equipment and crewmembers into disarray right when Supersport Race 1 was about to begin. With the track surface affected by the quick, but prodigious deluge, tire selection became critical. The start of the race was only delayed a little more than 30 minutes, which meant that the track was still very wet, but warm temperatures and a brightening sun began to evaporate the water from the tarmac.

For JD Beach, the race strategy ssadly didn’t work, as the defending MotoAmerica Supersport Champion and his team started from fourth position on the grid with his #1 Y.E.S./Graves/Yamaha R6 shod in full rain tires, and with expectations that the rain would return at some point in the race. JD got off to a great start in the race, immediately took the lead, and stretched out a gap that ballooned into more than a 12-second advantage.

The extra grip of the full rain tires on the wet VIR track helped JD dominate in the beginning of the race. But, as the laps clicked off, the rain stayed away, and the track dried out, JD’s pace remained relatively consistent, while Garrett and several of the other riders who had decided against racing on full rain tires increased their lap times, caught up to JD, and ultimately passed him. JD finished the race in 14th, which was a devastating result for him and the team.

Sunday’s Supersport Race 2 was run under dry and sunny conditions – much different than Saturday’s Supersport Race 1, which was contested on a wet track due to a quickly passing storm that ravaged the paddock just prior to the start. Better weather made for an exciting race, as JD’s teammate Garrett diced for the lead several times during the 23-lap event.

On the final lap, Garrett was passed momentarily, but he used the power of his #31 Yamaha YZF-R6 to regain the lead on the run to the finish line and take the checkered flag by just three one-hundredths of a second over French rider Valentin Debise.

JD Beach, who is the defending MotoAmerica Supersport Champion, had a strong comeback from yesterday’s result. JD raced in the lead pack throughout the entirety of the event, and he also relied on his #1 R6 to power him into third place at the finish line.

“We’ve been struggling a little bit with bike setup,” commented JD. “The front (of my R6) just hasn’t been feeling good this year, for some reason. At New Jersey, I was able to ride over it, but we’re still missing something. It’s great to have two Y.E.S./Graves/Yamaha R6 machines on the podium, though. Congratulations to Garrett. He’s on such a roll right now, and we’re just going to keep working hard and try to stop it.”

The Y.E.S./Graves/Yamaha Supersport team will be back in action in three weeks as the MotoAmerica Championship will be at Road America in Elkhart Lake, WI, on June 3 – June 5.