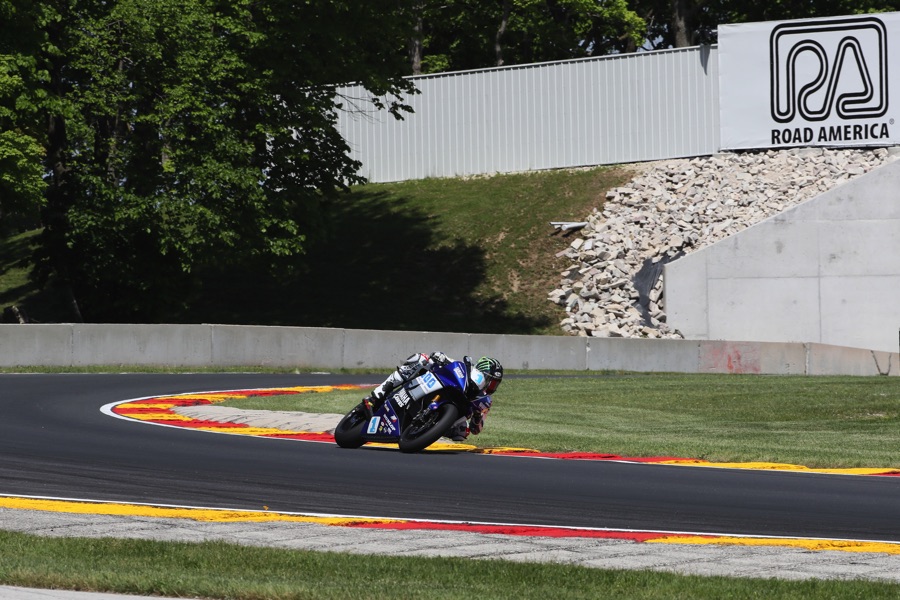 Garrett started from the pole position that he earned in qualifying earlier on Saturday, with JD gridded right next to him. Rain earlier in the day meant that the race went green with the Wisconsin track still damp in spots. Slicks were the tire choice for all the top riders, and the pace started out slower, but picked up as the laps wound down.

The conditions were essentially a non-factor for Garrett and JD, who got off the line well and stayed in the lead pack throughout the race, with each rider taking a turn at leading the race. With only a few laps remaining, Garrett put his #31 Y.E.S./Graves/Yamaha R6 up front, put his head down, and ran his fastest laps of the race at the end. JD did the same, and given that draft passes are a critical maneuver at Road America, looked perfectly positioned to steal the victory from his teammate by passing him right before the checkers.

It was so close, but the timing of JD’s pass just didn’t allow him to get past Garrett, who notched his sixth win of the season and extended his Championship lead to 30 points.

JD commented, “I had a chance earlier in the lap to try to get by Garrett, but I decided not to try it. So then, I tried to time it and catch him at the stripe. Unfortunately, it didn’t quite work out. I’m happy with the race, though, and how I’m riding.”

Garrett Gerloff and JD Beach took turns leading Sunday’s MotoAmerica Supersport Race at Road America, but when the checkered flag flew, the two teammates had to settle for second- and third-place finishes.

Garrett, who won Saturday’s Supersport Race 1, started from the pole again on Sunday after breaking the Road America Supersport lap record in Saturday’s qualifying, but it was his teammate JD who got the holeshot going into turn one, with Garrett slotting into second.

Valentin Debise got past Garrett, and he and JD tried to pull a gap, but Garrett was having nothing of it, and stayed with the two race leaders. Garrett passed Valentin, and set his sights on JD. The action was non-stop as Garrett took the lead, and then Valentin passed Garrett, only to have Garrett re-take the lead again. The two rivals swapped the lead a couple of more times on the final lap, and Garrett tried to time his pass heading to the checkers, but it didn’t quite work out as Valentin took the win with the two Y.E.S./Graves/Yamaha teammates completing the podium.

“We decided to go with the soft tire today and, for some reason, it shredded the rear,” commented JD. “About halfway through the race, it was really bad on the right side and Valentin got by me. I was able to stay in the lead pack throughout the race, though, and I’m happy to get on the podium here at Road America.

“I lost a good friend (Moto2 rider Luis Salom, who passed away from injuries sustained in a practice crash at Catalunya) on Friday, and it makes me realize how quickly things in this sport can change. I’m thankful that I was safe today, and that I brought it home in third.”

The Y.E.S./Graves/Yamaha Supersport team will race again next weekend as the MotoAmerica Championship will be at Barber Motorsports Park in Birmingham, AL, on June 10-June 12.