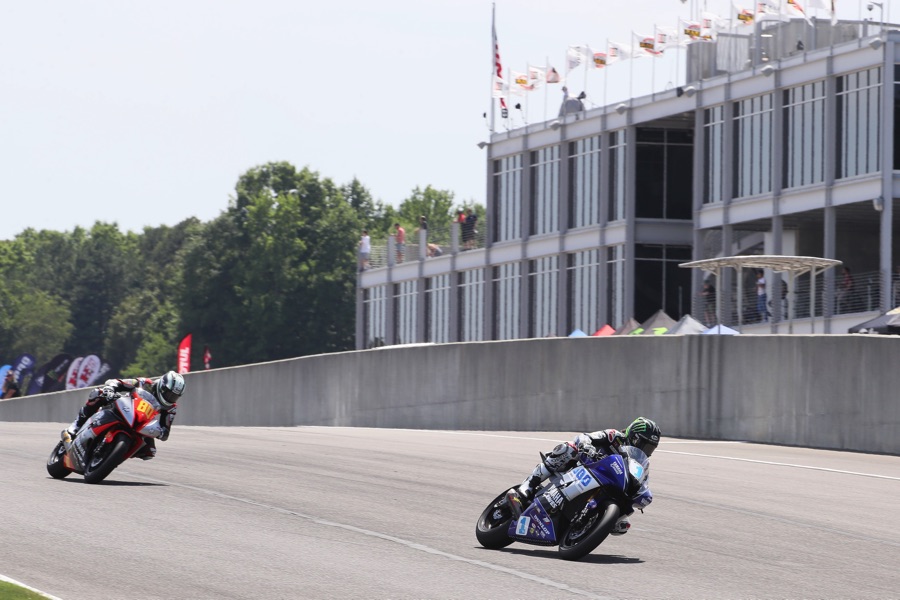 JD used his prodigious flat-tracking skills, where getting a good start is so vitally important, and he rocketed his #1 Yamaha YZF-R6 from the second row on the grid. Once the “Jiggy Dog” got into the lead, he was never headed, taking his second win and ninth podium of the season.

Garrett started from second position on the grid, and he struggled initially to keep the front wheel of his powerful #31 R6 planted on the Barber asphalt. Steeling his determination, the Texan focused on passing riders on his way to JD in the lead. Garrett caught up to his teammate, but he was never able to get around him, as JD was on rails throughout the 17-lap event (the 21-lap race was red-flagged and declared final due to lightning visible in the vicinity).

After the win, JD said, “I like to lead the races and, if I can get out front, that’s what works best for me. I was able to do that today, and I concentrated on clicking off consistent laps after I got up front. I was able to make clean passes through most of the backmarkers so that helped me stay in front of Garrett.”

JD Beach made it clear at Barber in race 2 that he is not ready to hand the crown to his Yamaha Extended Service (Y.E.S.)/Graves/Yamaha teammate and current points leader Garrett Gerloff, also winning the second of the weekend’s Supersport races to shave precious points from Garrett’s lead. It’s the second year in a row that JD has notched the double-win at Barber.

Starting from the second row on the grid, JD got off the line well and slotted in behind equally quick starter Garrett, and the battle was on as polesitter and Wheels In Motion/Meen Yamaha rider Joe Roberts was also in the mix from the beginning.

Both JD and Garrett swapped the lead back and forth, and they also swapped fastest laptimes of the race, with JD going fastest in lap 4, while Garrett eclipsed JD’s time with a faster lap of his own on lap 14. The final circulation of the 21-lap race saw both riders dicing for the win, and despite having to pass lapped riders, JD nearly matched his fastest lap from earlier in the race as he took the checkered flag for his third race victory in 2016.

“My ride wasn’t super-smooth today, but I did what I could,” commented JD. “It was so fun to race with Garrett, Joe, and all the guys. There was a lot of passing back and forth, which I like. It feels great getting the double-win here at Barber for the second year in a row. As for the Championship, I’m just going to go for wins because I’ve got nothing to lose. All the weight is on Garrett’s shoulders right now since he’s in the lead, so we’ll see what happens ”

Garrett said, “JD was riding really well, and I was doing all I could to stay with him. With a couple of laps to go, I was able to get past him, but it didn’t last long with the pace he was going. It was a tough race just like yesterday was, but I’m glad to get two second-place finishes this weekend, especially against a flat tracker like JD.”

The Y.E.S./Graves/Yamaha Supersport team will race again in two weeks when the MotoAmerica Championship will be at Utah Motorsports Campus in Tooele, UT, on June 23-25.