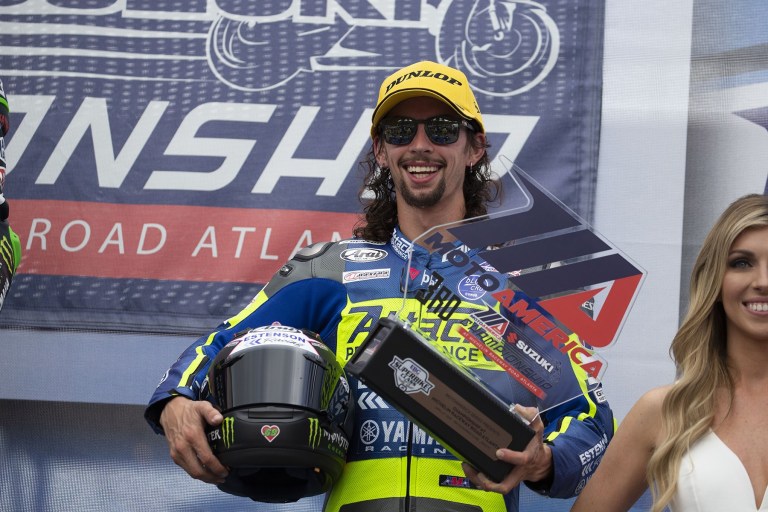 Attack Performance Estenson Racing’s JD Beach got off to a great start at the MotoAmerica season opener, scoring his first-ever Superbike podium in race one at Road Atlanta, Saturday, April 6.

Although he’s technically not a Superbike rookie, it was JD’s first MotoAmerica Superbike race – the series that became North America’s AMA/FIM-sanctioned professional road racing championship in 2015. Right from the start of the weekend, Beach was gelling with his Attack Performance Estenson Racing Yamaha YZF-R1, ending day one with a decent qualifying performance in fifth. He went on to improve on that result with a fourth-place finish in Superpole.

When the lights went green in race one, JD beat everyone to the punch to take the holeshot. It was a heated battle for top honors with six riders in the mix and some of the competition making errors. Beach kept his cool even though positions were changing throughout the race. It then came down to the wire for second place, all the way to the checkered flag, with the Kentucky-based rider coming up short by what was recorded as one one-thousandth of a second.

JD’s third-place finish was, by far, a career-best Superbike result, with a pair of eighth-place finishes in 2011 his previous best, back when he was racing Superbike at the young age of 19. The two-time MotoAmerica Supersport Champion looks to continue his Superbike education and build on his forward progress in tomorrow’s race two, Sunday April 7.

JD Beach – MotoAmerica Superbike #95:
“It feels great to get my first Superbike podium. I think we got a little bit lucky, but I still had to put myself there. Getting the holeshot was awesome. That’s one thing that I’ve always been good at is starts. I knew if I could put myself up there at the start of the race, I could learn as much as I could. So that was my plan, to get up front and try and learn. I think we learned a lot today. I think that’s going to be good for the rest of the year. I can’t thank Attack and Tim Estenson enough for the support and the help this year. It’s really a dream come true. I think for us to start the year out like this is great. It’s definitely something we can build off of. I can’t wait for race two and to get to tracks that I like a lot better.”