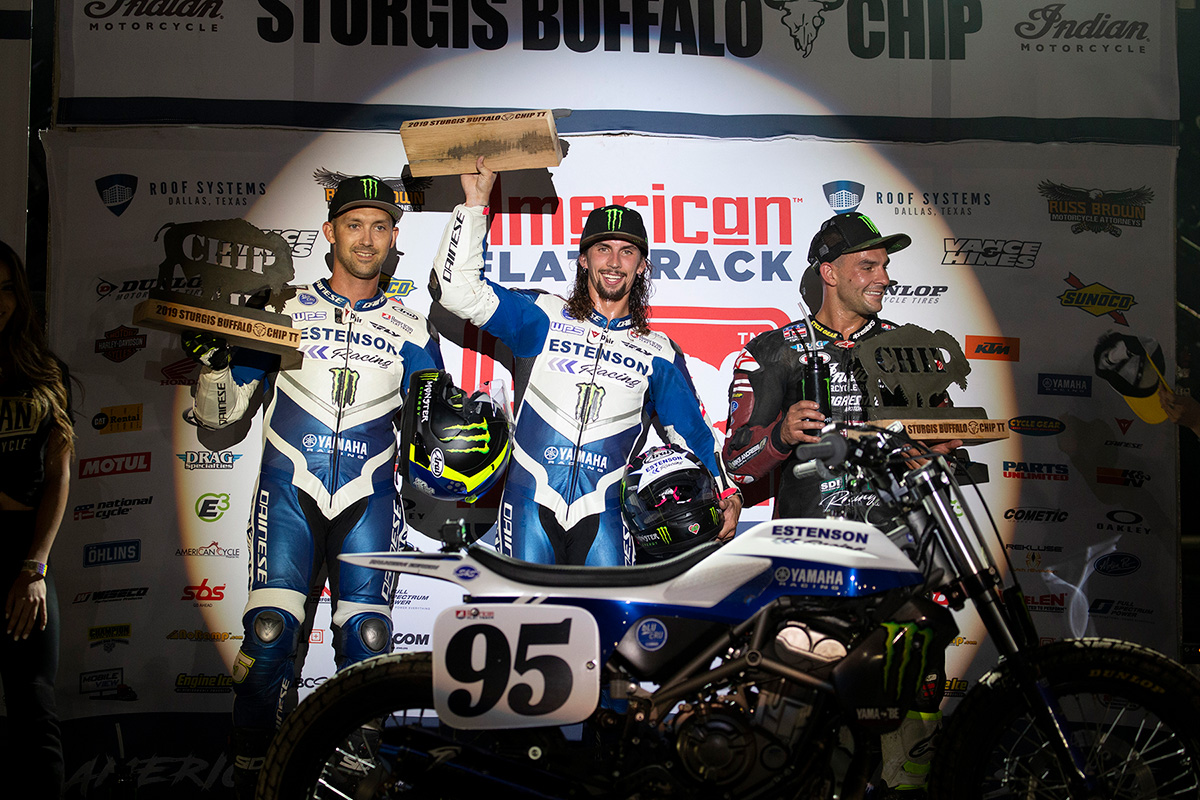 Estenson Racing riders Jake Johnson and JD Beach came out swinging Sunday night in an AFT Twins Main Event thriller at the Buffalo Chip TT to score a spectacular 1-2 finish aboard the all-new Estenson Racing Yamaha MT-07 DT. It was solid day for the team as a whole with all four riders making the Main Event. Rookie Kolby Carlile crossed the line 12th for his best finish in the premier class, with Roger Hayden’s race ending early due to a technical issue after the jump.

It’s no secret that both JD and Jake love the TT tracks. The pair had the race marked on their calendars as one to look forward to, and it didn’t take long to see why. They were in top form straight out of the gate in qualifying and went on to win their respective Semi races.

JD was unable to match his teammate’s start and found himself back in fifth and fighting his way forward on a track where it wasn’t easy to make passes. As witnessed many times over, the dirt track/road racer fights to the finish. With about 2.5 laps to go, JD worked his way up into the runner-up spot and went about chasing after his teammate. Before crossing the line at the white flag, he was right on Johnson’s heels, but it looked like it was going to be too little too late for JD coming out of the last corner, until a technical issue with the No. 5 machine hurt his efforts in the drag race to the finish, giving JD the win by .201 of a second.

The 1-2 finish marks another first for the team in the premier class, as well as builds on Beach and the team’s historic achievement earlier this season at the Super TT of putting a Yamaha Twin on top of the box for the first time in nearly forty years.

JD Beach — AFT Twins #95:
“The night started out well. I won the Semi. The bike felt really good. Going into the Main Event, it was cool because Jake and I were starting one, two. He got a rocket start. I got off to fifth or so. This track was really hard to pass on. I knew I needed to make passes, but I was trying to stay calm, too. I just tried to make my way past guys and got up into second. I saw Jake out there, so I really started pushing and made up some ground on him going into the last lap. I was there, but not close enough. Coming out of the last turn, he kind of went wide. So I knew we were going to drag race. Then, right as we really started getting on the gas I heard his bike make some noises. I saw his bike slow down a little bit, and I got by him and won. It’s awesome to win, but to win like that sucks and to do that to Jake, I just hate it. He’s such a great dude. I didn’t want to see that happen to him. But it’s awesome, too, that the team went first and second. So it’s weird. It doesn’t feel like a win. It doesn’t feel amazing, but I think down the road, it will be cool. I’ve proven that I can win. We’ll just go to Peoria, I guess, and see what happens.”