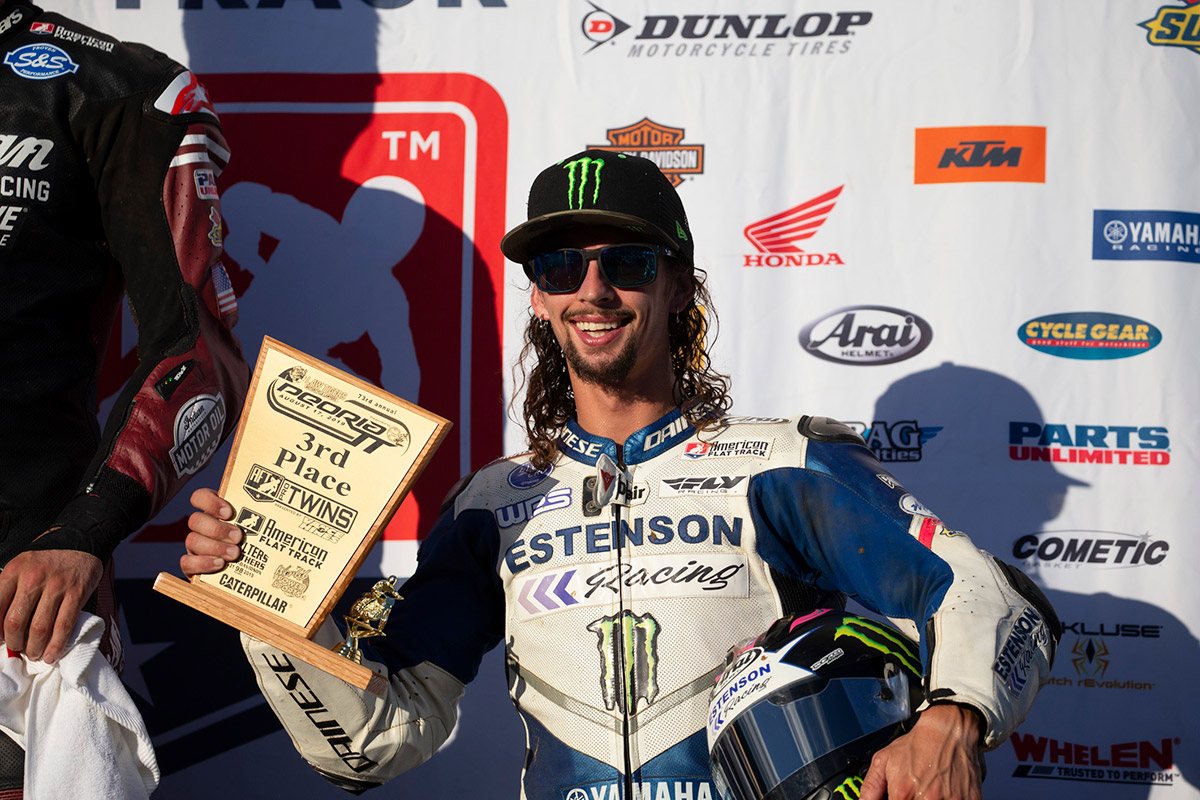 Estenson Racing’s JD Beach fought to the finish to take the final spot on American Flat Track’s AFT Twins podium at the 73rd running of the Peoria TT on Saturday, August 17. Jake Johnson and Kolby Carlile finished inside the top 10, with the fourth member of the Twins team, Roger Hayden soldiering on in spite of technical issue late in the race to finish 13th.

Mother Nature nearly spoiled the plans for race day with a downpour early Saturday morning, but the track was turned around and ready to go for a delayed afternoon start. Johnson led the way in qualifying in fifth, with JD not far behind in seventh, Hayden 10th and Carlile 12th. Both Beach and Johnson had a good start in the Semi, ultimately finishing second and third, respectively, giving them a front row spot on the grid for the Main.

In the Main Event, Beach and Johnson were right behind the top three for the early part of the race. With two TT wins under his belt already this season, the dirt track/road racer was looking to get past the reigning AFT Twins champ but found himself locked in battle for the long haul. That race for the final spot on the podium became a three-way fight with JD getting shuffled back a position. In the end, he was able to pass both riders on the final run to the checkers and cross the line third. His efforts at the Peoria Motorcycle Club mark his third podium of the season.

Estenson Racing’s AFT Twins team gets a weekend off before returning to Illinois for a Springfield Mile doubleheader, on Saturday, August 31, and Sunday September 1.

JD Beach — AFT Twins #95:
“It just was hard because I felt like we had more speed, but going through turns one, two, three and four, the bike didn’t roll through the turn as well as I hoped. I was behind (Jared) Mees. He would make ground, and then I would make ground on him. We were just kind of going back and forth, but there really wasn’t anywhere where I could get by him. With four laps to go, Rob (Pearson) got by me in the last turn. He came flying by me. I had a feeling that he knew that we were fighting for third. Going into the last lap, he was real close to me. I wanted to make sure I was right there. I knew he was going to try the same pass (on Mees) that he did on me. When he was going for that, I kind of set up wide and turned it and got a good drive. Then Rob wheelied and started coming over, we came together but I just stayed on the gas. To get third is great. We’ve got some Miles ahead of us now, looking to see what we can do.”