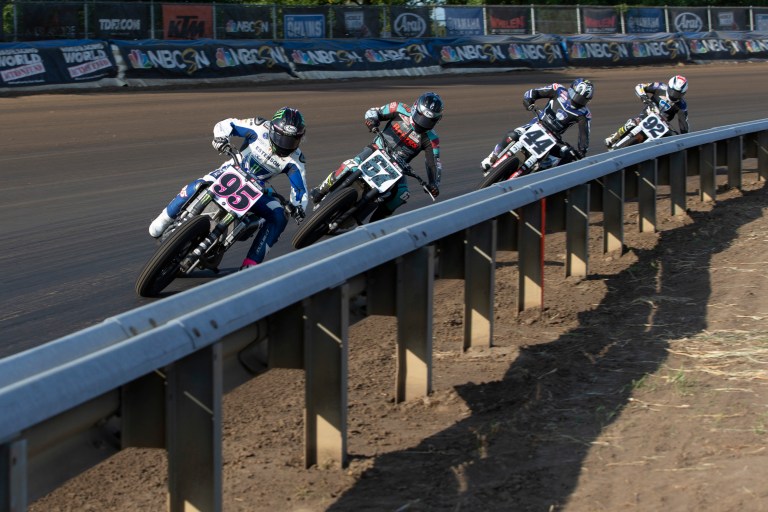 It was a tough weekend for the Estenson Racing AFT SuperTwins Team, but JD Beach and Kolby Carlile soldiered on to score points at the American Flat Track Springfield Mile doubleheader in Springfield, Illinois.

The team put in a lot of hours in between the two Mile rounds on the schedule and came into the Illinois State Fairgrounds with some improvements. Beach showed strength straight away, battling the competition and finishing fourth in Saturday’s Semi. In the Main Event, he got off to a flying start in third and was in the hunt for a top-five until a technical issue arose which ultimately ended his race before the checkered flag was drawn.

Beach and the team were hoping to take advantage of their progress in race two but were met with new challenges on a changing track in Sunday’s windy conditions. He got off to another great start, rocketing from the back row of the grid to sixth but was unable to maintain the pace and crossed the line 12th.

Beach’s young teammate Carlile continued to search for grip in an uncharacteristically slick Springfield Mile. The “Flying Tomato” kept pushing and managed to score some points, finishing 14th at the Springfield Mile I. Unfortunately he was unable to better his result Sunday and retired from the Main before the halfway mark with a technical issue.

The team looks to regroup and come back swinging at next weekend’s Williams Grove Half-Mile doubleheader, September 11-12, in Mechanicsburg, Pennsylvania.

“It was another tough weekend for us. It was definitely a weird track this weekend. You could ride anywhere you wanted but there was no grip. Usually, this track is known to have a lot of grip and be really good, but even going down the straightaways it was all dry and broke up.
It’s really frustrating because we’ll get glimmers of hope and the bike will be working well. It just dangles out in front of us and then rips it away. I feel like we have the stuff to do it. It’s just one thing or another. I know myself and the team are all working super hard. We’re not giving up. We’re just going to keep at it. We made it through this weekend healthy at least, and then we’ll give it a go next weekend.”