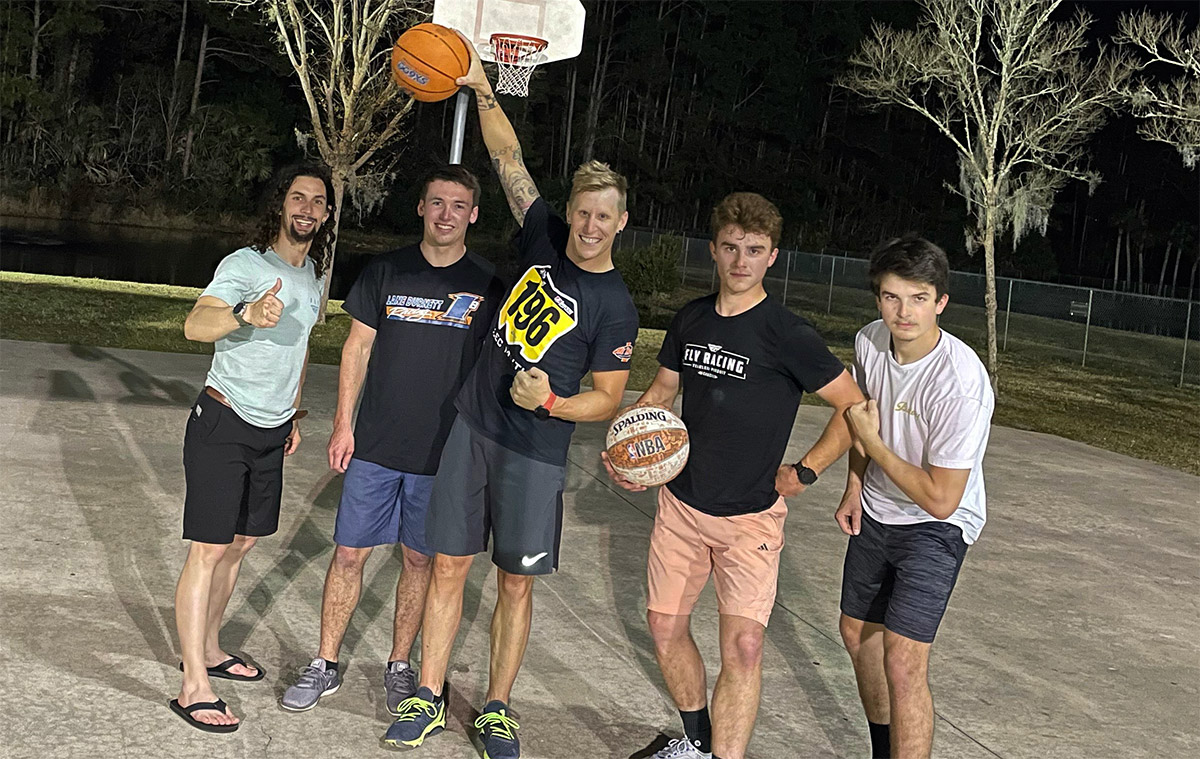 With all the great feedback from the last “Beach Report,” I decided to do another one with the last week we just had. There are some good stories I have and good ideas for this week that I want to share before I forget haha.

I’ll start with some stories then at the end I’ll give you some rider bios of my two teammates and Davis Fisher. But the funny part will be that I gave the three of them the chore of doing one for me.

To start last week a huge group of us rode at Pax Track in Bunnell, FL. This track is close to where we are staying and the owners of the track welcome all the flat trackers with open arms. They are great people and add an extra practice day during the week for us. This week we had Davis Fisher, Dallas Daniels, Trevor Brunner, Briar Bauman, Jarod VanDerKooi, Jared Mees, Kody Kopp, Max Whale, and James Rispoli. Almost enough people to run a National !!

I could go on forever with all the stories and laughs but there was one that stuck out to me. One that really made things come full circle for me. Those who know me, know I can be a bit of a smartass haha. I know growing up, people I was around that was older than me I always made old man jokes. They would always say, just wait, before you know it you’ll be our age. When I say this I’m talking about me being 18 and making jokes about guys that are 28 to 32 or so. Now I’m the 30-year-old around the 18-year-olds, luckily I don’t feel or most of the time act like a 30-year-old haha.

After the day riding, it was warm, so everyone was getting loaded up and most of us weren’t wearing shirts waiting to stop sweating. At this point I’m sitting in the back of my van getting dressed, just listening to all the heckling going on. I hear Max say to Trevor “What are you like 30, look at all that hair on your chest.” Then everyone starts laughing. I look down at my chest, knowing I am 30 but see no hair. Right then I realized two things, first, at least I don’t look 30 and there’s no old man jokes going towards me, and two that being a smartass will come back and bite me in the ass one day haha. But I’m a slow learner and I’ll never stop.

I’m still young at heart and like to have fun and joke around. One day this week, we were all on the couch watching some TV. I was sitting close to the front door and we saw someone coming to the front door, we just assumed it was an Amazon guy or something. So I jumped up and started barking at the door like a dog to see what the Amazon guy would do. Quickly we realized he wasn’t leaving and it wasn’t Amazon. Davis with his quick thinking jumped up and started yelling get back, go to your cage, as I slowly opened up the door pretending to push the dogs back. We should have got an Emmy for that performance because the guy at the door felt bad for spooking the dogs.

I think we have better chances of being actors than professional tennis players though. With it getting dark so early this time of year and none of us like sitting around, we’ve found some lit-up tennis courts and basketball courts. Our new passion is tennis, playing doubles, and making up our own rules as we go. The rules and score keep changing from game to game because we are all too competitive and all think we remember the right rules of a game none of us have played unless it was on a Wii. But they’ve got nothing on me and my flip-flops!!

Davis Fisher #67
Now, this guy is a mix between Mr. Fix-it and Gumby. I’m not sure he’s too flexible off the bike but on the bike, he can jump sideways or go through a turn completely sideways, save it, keep going, then come into the pits and not even know he did it. When it comes to working on stuff, NO MATTER what it is he can fix it and he won’t stop until it’s fixed. If someone needs a van built for hauling bikes, he gets the phone call. The steering shaft started breaking on his van, a part that broke on mine and I took it straight to the shop. Davis just got the part and started working. As it got dark he decided to stop and finish it the next day. I should have put money on it because not even 30 mins later he was out there with a headlamp on, in the dark, working on it because it bothered him it wasn’t done. The one thing about him I do know is if he’s working on his race bike in a small space with a stack of tires next to him, he’d rather them fall on him than have help move them. haha.

Dallas Daniels #32
Dallas is like a walking movie quoter. So the best description of him is with a movie. I would say he is like Brad Pitt in The Curious Case of Benjamin Button. In the morning he is an older man and as the day goes on he becomes the age he is. He gets up, drinks coffee, and watches tv. When it’s time to go to work (Bicycle, gym, or riding) he takes it seriously and does what he needs to. But as the day goes more movie quotes and laughs start to come out. When it comes to racing he likes to study old races and knows a lot about past racers and racing. But if someone says something or does something he has a movie quote to come back with. I’d say he’s a master of different voices too. Particularly our homeless friend Randy and an Australian voice. If it’s late at night and we are on YouTube and he pulls up a video and says “You gotta watch this”, you are going to be in for a surprise.

Trevor Brunner #21
Trevor is the new one to the group. He is 19 but was coming up through dirt track while I was road racing full time. I knew the name but had never been around him until this trip. I do know his right wrist works well and isn’t afraid of twisting the throttle. You’ll never have to encourage him to get after it on the race track. Off the track, he’s willing to put in the work and wants to learn to get better. He and Dallas feed off each other when it comes to movies quotes but Trevor will randomly sing parts of songs and use different voices that don’t match the song or quote. He’s a very good listener when it comes to stories. He’ll look right at you and listen to what you are saying, the only problem is you’ll have to repeat it. Even though he looks like you have his full attention his mind is somewhere else, usually an app you swipe on.

– written by Davis, Dallas, and Trevor

JD Beach #95
JD is a determined guy with no quit. He surrounds himself with motived riders, only to out work them with the mindset to be the best. He follows a strict routine and lives by the motto, “You don’t have to get ready, if you stay ready.”
On the track, Jd is a fierce competitor; off the track, he’s a guy you can count on to give you feedback with a helping hand. On the rare occasion when Jd is away from training, you can find him enjoying time with his golden retrievers, golfing, hanging out with friends and family, and most importantly smashing his mint chocolate chip ice cream on Sunday nights. Living with Jd makes us all better, by his motivation to keep going and pushing ourselves past limits we didn’t know we had. Furthermore, we are thankful of his skills in the kitchen with strict instructions of our hands NOT being allowed anywhere near cooking utensils.