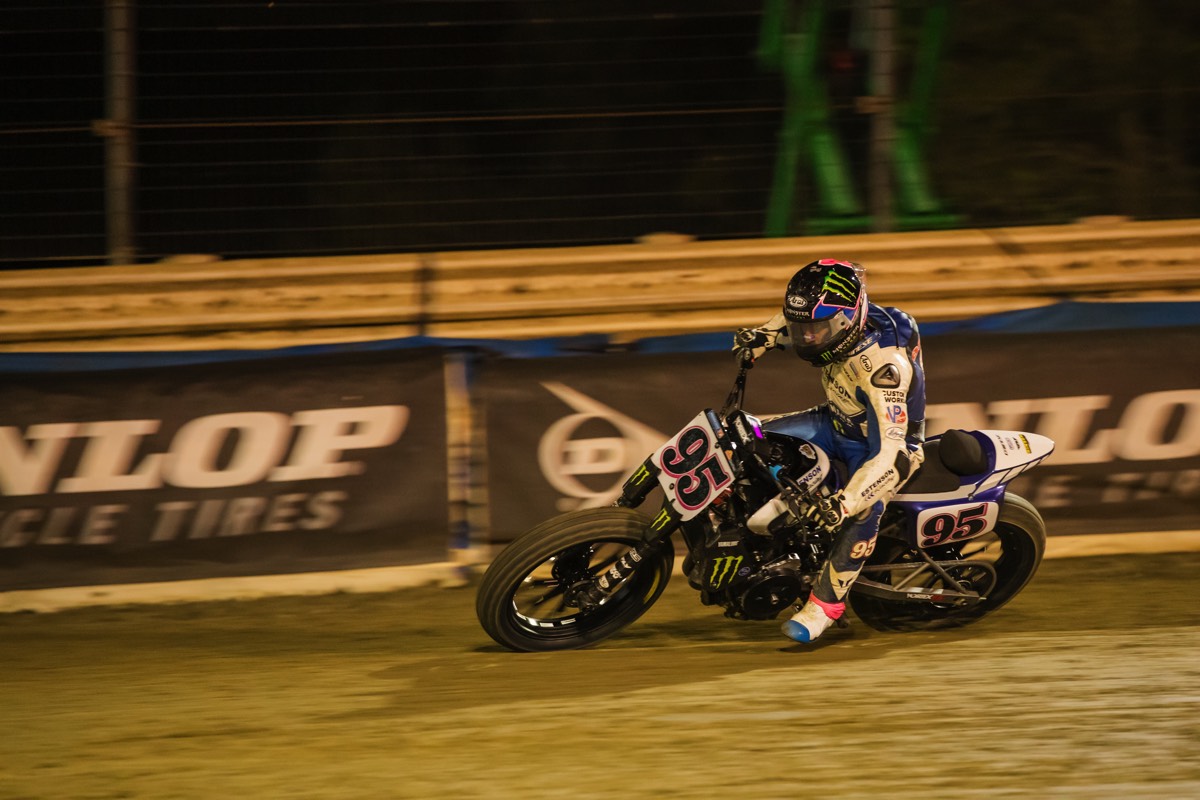 Finally, the long winter break is over!! We finally got to go racing but just barely with all the rain Florida was getting hit with. I missed a week getting busy leading up to the races, so I’m going to recap the race week. Then a quick story about winter training.

Race week started with a test the Sunday before the official American Flat Track test that was to take place Wednesday. Like I said in the last report the team didn’t let Dallas (Daniels) and I see the bikes until the test. And let me tell you when they rolled those bikes out of the semi-truck onto the lift gate I was in awe. They looked so good, from the tank and seat design, the color scheme, every nut and bolt on the bike. The team really spent their time on these fine machines and I could tell Dustin (Say, Crew Chief) put his heart and soul into building mine.

This offseason I knew the team was doing everything to improve the bike, so I knew I needed to look in the mirror at myself and eat a slice of humble pie and try and improve. After talking it over with Dustin, I decided to bring Mike Hacker on to help with my riding and being able to just watch me and see what I’m missing. 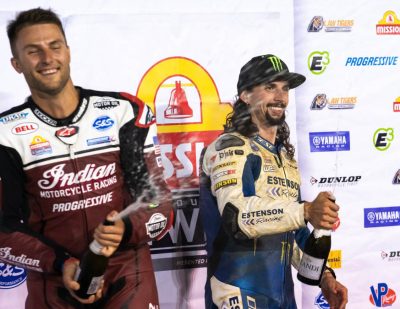 A little back story on Mike, for those that don’t know he’s won multiple Grand National flat track races, and also has worked on teams that have won Grand National Championships. I was lucky enough to meet Mike probably 20 years ago. I have to thank American SuperCamp for that, they have been a big part of my career and continue to help.

To say the least the test and working with Mike went great. We were all excited leaving the test and couldn’t wait to go racing!

The only problem was the weather started to take a turn for the worse. It had been beautiful leading up to the official AFT test then the rain started rolling in. For the test, we only got on track twice but man the bike felt good. It was so refreshing to have such a good feeling on the bike. My crew and I were meshing great, Mike was helping, it was just going so well. Then just like that, the day was done because of the rain. It rained so hard and so quickly I crashed in the pits twice on my electric Super73 bicycle haha. 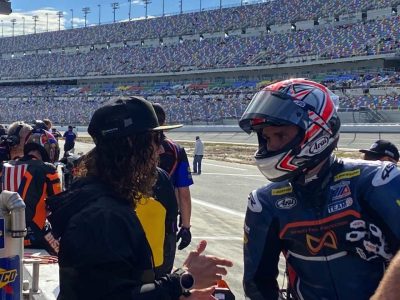 After that we had another full day of rain and no racing, getting pushed back to Friday and hopefully Saturday. When we got to the track Friday morning around 11 am I didn’t even think we would get to race. The track looked so wet and there was a chance of rain coming in. AFT waited and waited then finally made their move to get onto the track and they did a great job. I was blown away by how well the track was from the get go and hats off to the whole track crew. They kept the track fast and safe all night. Track prep I think is something that has held the series back but with the way they handled this near rain out, you can tell they’ve done their homework this winter.

It was going to be a quick show, with going straight into qualifying starting at 7 pm but we at least had two rounds. The focus level between the crew and me was at an all-time high. For how exciting we were to finally get the season started we were super calm. Everyone knew their job and it just went so smoothly. I’d ride, come in, talk to Dustin about the bike, agree on a change, then I’d turn and talk to Mike about my riding then right back on track. The calmness was confidence, something I think I’ve been lacking.

It was time to line up for the heat race. I had a front-row start, sitting second over with Briar on the pole. When the lights went out, I launched off the line and went straight to the top of the track and just bumped the cushion all the way around the top of the track. Was that the plan? No, not really but that’s what was great about it, it was just natural, my mind wasn’t thinking about what to do. I was just doing it. Confidence. So often in racing when you have to think about what the next move is, its too late. We were able to get the heat race win and got our spot in the Mission Challenge.

The Mission Challenge is a four-lap dash for cash. It’s nice to get in there to try and get that extra money but also it’s closer to the main than the heat race so you get to see how the track will be. Briar rocked off the line and took off. The track had changed from the heat race so my high line wasn’t working for my bike, so I quickly ran it into the entry of the turns high, made a sharp turn then tried to make long straightaways. Briar ran up top but I was slowly making ground up.

Going into the main we were feeling good. I was starting second pick with my rookie teammate Dallas Daniels starting on pole. Sitting on the line it was dead silent, at least that’s what it felt like. I could just feel my bike and my eyes were locked onto the start light. When the lights went out, Briar and I made it into turn one first, he took the high line and I took my line, turning it hard and coming off the bottom. Those first couple laps Briar was on rails and just got enough of a gap to have a little breathing room. The next thing I know Briar’s brother, Bronson Bauman came by me on his Harley XG750 and he was on the gas. He was also on the rear brake hard, that thing was glowing bright red and was throwing pieces at me. Bronson quickly got a gap on me but I kept working my lines and reeled him back in. I was right on him with around five laps to go. Our lines were just enough different but also the same that it made it hard to pass. Also sitting third I was a little scared to mess up and get passed not knowing where fourth was. I wasn’t racing forward enough but it is hard because in the past a podium was hard to come by but now I feel like I can race forward and know a podium is actually possible.

To finish the night in third and on the podium was a great way to start the year. It was also really cool that AFT had THREE different brands on the podium, Briar on the Indian, Bronson on the Harley Davidson, and me on the Yamaha. Plus Dallas was fourth in his first national and Jared Mees on the Indian rounding out the Top 5. 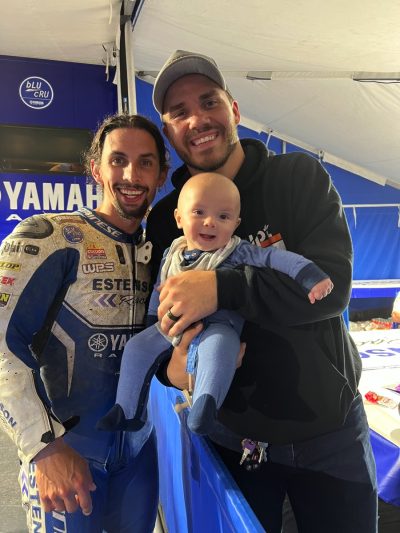 Unfortunately, the next day was rained out. So I went over to the Daytona Speedway to watch the MotoAmerica 200 and be there with Hayden (Gillim). It was great to have him back at the races. We’ve lived our lives together at the race track. In the morning it was so fun just walking around the pits carrying my nephew Stone (Hayden’s son) and seeing race bikes. I felt like it was show and tell haha. Then it was time to go racing. Hayden got dressed in his camper and headed to pit-lane on his Grom with his wife Summer, so Hayden decided to see how fast I could run, let’s just say wearing Vans and carrying a Smoothie King smoothie I was getting after it. Watching him get ready for the warmup lap made me so excited and happy. As he rolled out I was headed straight to the grid. It was so nice to be back in the same routine he and I were in for so many years when we were road racing. The race got going and I was doing my normal pacing. I’d go to the pit-wall to watch him go by, then go to check his lap time, then go to watch the screen, then check his segment time, then back to the wall to start it all over again. I did that for 57 laps. There was one red flag and it was nice to just talk racing and dissect the laps to see what could be better. I also got to help with the pit stops. In the end, he ended up ninth on a Suzuki 600, which is a good result for being 6 foot tall and on a 600 in the new SuperSport rules.

Up next is round two of American Flat Track in Dallas, TX this coming weekend.

Ok, just a quick story because this has been a long one. The last time Davis, Dallas, Trevor, and I were going to the gym at Planet Fitness we decided after our workout we would have some fun. For those that don’t know, Planet Fitness has a “Lunk Alarm” which goes off if you’re too serious or too loud. We decided we would test this alarm. On the rower machine, I was pretending I was finishing. Throwing the line out and reeling it back in. Then in a workout area with this big thing for pull-ups and monkey bars and stuff like that, we made it a play around. I was doing pull-ups, upside down. Then locking my legs up there and doing sit-ups. A Planet Fitness employee was up there training someone and was trying really hard not to laugh. But to say the least, we didn’t achieve our goal of setting the alarm off. You can go to my Instagram page @JDBeach95 to see the videos.