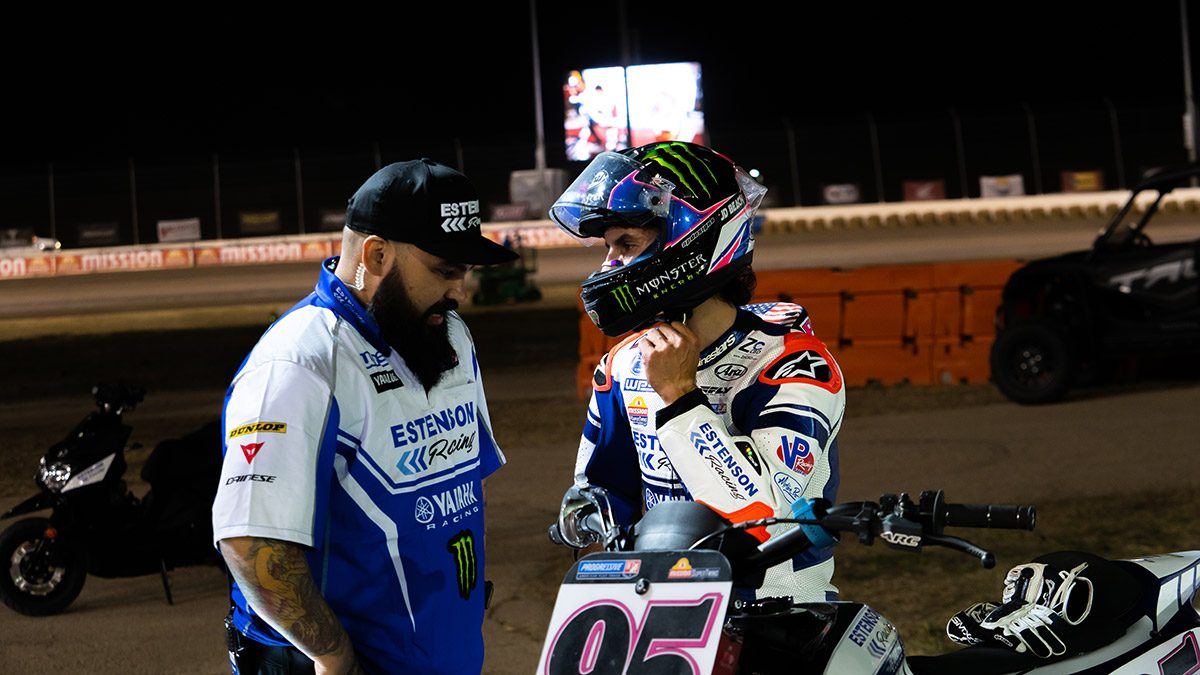 Another round down and another podium on a slick Half-Mile. Two podiums in a row wasn’t something I saw coming before the start of the season. Back-to-back podiums are something I haven’t done since I was road racing with MotoAmerica in 2018 on the Graves Factory Yamaha in the SuperSport class.
The race weekend in Dallas, TX didn’t go as smoothly as the last round. Track prep made more headlines this weekend than the actual racing. The dirt at Texas Motor Speedway just won’t take in water, it would either sit right on top, or the dirt would just soak it up and be dry again.

But before we get too far into this, I want to talk about the highs and lows of racing. As a racer at a high level you have to be very selfish. Any racer that has won or been successful at the highest level in their sport will probably say at some point they only worried about themselves. As a racer during your career, it’s very normal to go through highs and lows. You have tunnel vision on your career and what is going on, usually during your lows, you feel no one has had it this hard or this bad, and on your highs, you usually don’t savor them and just think about what’s next. But in racing, the racer isn’t the only one that has those highs and lows, the racers’ loved ones do, the teams do, the mechanics do, but as a racer, you can be a bit selfish and not pay attention to those. 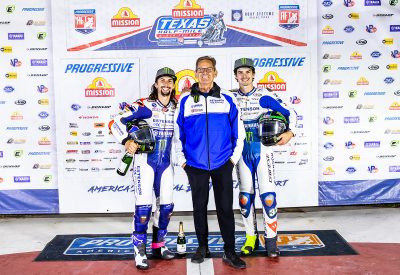 In this case though, it’s American Flat Track that is going through a low right now, right after having a high. Now I’m not here to bad mouth or talk shit about the series or the people running it, we are all in this together. Volusia I feel like was a home run for the most part for them. They ran a great show with the weather we dealt with, no one got hurt, and it was done on time.

Fast forward to Dallas and it was the total opposite. The show took way too long, we got too many riders hurt from poor dirt conditions, and we ended up with a bunch of finger-pointing.

The problem with all of this though is there’s no unity in the American Flat Track community. Yes, one hundred percent something has to change, and track prep needs to improve greatly. We have dealt with this way too long. But there’s too much division between the whole paddock. Everyone wants to point the finger at the next person. It doesn’t matter if it’s the AFT staff saying it’s the riders, the riders saying it’s AFT, mechanics pointing the finger. I can’t believe all the hate and bad-mouthing all around that’s been happening on FaceBook and other social media platforms. It’s not helping the sport at all and it’s not fixing the problems. 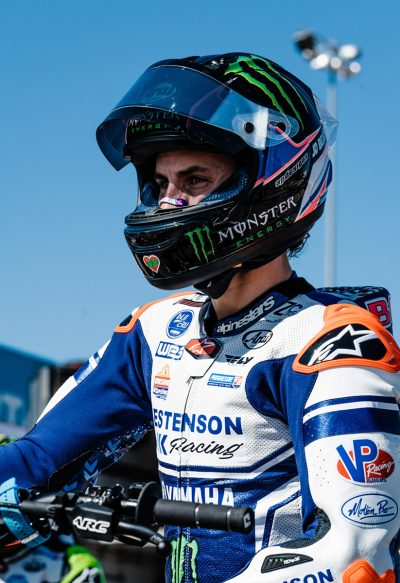 I can only speak for myself, but I want to be a part of the solution, not part of the problem. Do I have all the answers and know how to fix it all? No. But I want to do my part to try and get this ship that is AFT to set sail and not be a part of the group that is hanging in the bottom of the ocean being an anchor hurting the sport. After the main event, walking back to the truck from the podium, I stopped to talk to Kevin Crowther about the night’s events. Notice I said stopped to talk to him, not at him. It was a very productive talk and calm. We have to remember we (the riders) need AFT just as much as AFT needs all of us. So maybe next time instead of going straight to bashing the series, try talking to them, not at them.

Ok, let’s talk about not so serious stuff. We got ANOTHER podium on a slick Half-Mile. On a track that in the past would have been horrible for us. I still can’t believe the gains the team has made over the winter. It’s actually fun to race this bike now and I can actually race it, before it was just riding most of the time and hoping I wouldn’t get lapped on a slick track as we had in the past.

It was an exciting weekend for me too because I had gotten my new suit. Customs held up my suit for the last race. The exciting part for me was that I am back in Alpinestars. Dainese had been great to me but I have worn Alpinestars since I was probably 10 years old. It’s like when you are a kid and have that baby blanket, other blankets are great and get the job done and keep you warm but nothing is like your blanket.

The night went well. In practice and qualifying, the team and I just slowly worked on improving the bike and my riding. It’s nice to have a race bike now. In the past seasons, we were always testing stuff during practice and qualifying. Now Dustin and I can just focus on fine-tuning and getting better and faster. It is so important to always be on the front row, so as the day goes on that’s always the focus for the next step.

In the heat race, I had a front-row start but didn’t get a great jump off the line. Jarod VanDerKooi got the hole-shot, I was second, and had Briar Bauman right on me. The sun hadn’t gone down yet and the groove was even smaller during the day than at night. It was a tricky race, I knew I had to get at least second to make the Mission Challenge and to have a front-row start for the main. While trying to get by Jarod, I also had to block so Briar didn’t get by me. I tried every turn until the checkered but just couldn’t get by. 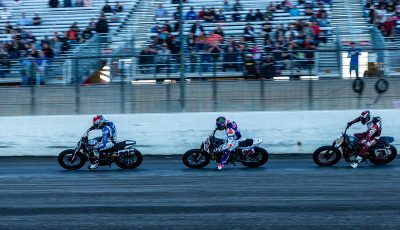 It was enough to get us into the Mission Challenge. Another four laps to try set up before the main and to make some extra money. AFT had spent some time street sweeping the track above the groove. With the sun going down, I had hoped there would be some grip to use. Off the line, I was starting on the outside so going into turn one, instead of shuffling into line on the groove I decided to try and blast around the outside. I looked like a hero for about half a lap then the line just gave away. I had to get back down to the groove. We lost out on the extra money but learned for the main.

Lining up for the main I had the last pick on the front row. There are only four spots so I just assumed I would be on the outside. I started rolling up there then quickly realized everyone before me, was picking spots two, three, and four, so I had to go down to the pole. When I got down there I realized no one wanted it because when AFT swept the track all the dust was in the line. From the starting spot you couldn’t go straight into turn one, you had to move to the right after the start to stay out of the dust. We did our warmup lap and I told myself I needed the start of my life, so I could get my bars in front of Jared’s and move over just a bit to be lined up for turn one. Well, I nailed the start and got the hole-shot. We were able to lead the first few laps before Jared Mees blew by us and slowly built up a gap. I was being hounded by Briar Bauman and my teammate Dallas Daniels.

Lap by lap went by and I just had my focus set on Jared. As the race went on I realized I was starting to reel Jared in a bit. I just kept calm and kept pounding out laps. Slowly chipping away at his lead until I was within bike lengths. As I was getting closer I looked at the clock and there were only 30 seconds left plus two laps. I gave it all I had but we came up short. I was proud that I never let up and just chipped away. Finishing on the podium again, in one spot better is awesome. It was really cool seeing Dallas get his podium as well as a rookie. The last thing that made the race even sweeter was to finish so close to Jared. He was faster Saturday night on a track that he raced in 2019 and the conditions were better.

Now we have a bit of a break until the next round but I’ll be very busy. I’ve got plans every weekend from now until then but I’ll be at races or on a motorcycle. So I can’t complain.