Well, it’s been a minute since the last report, it’s a good thing my income isn’t based on these reports. Don’t worry though, I’ll list all the excuses why I haven’t done one but the biggest reason has been because it’s consistently nice out now. I love being outside and in the sun, so once our Spring showers are over and the sun is out all day, I’m not very good at making time to sit down and be on the computer. 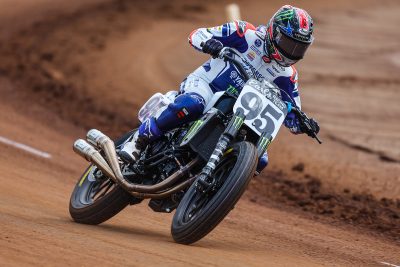 But really since the last Beach Report, I’ve been on the go. I flew to Austin, TX with Hayden to go to his first MotoAmerica race during the MotoGP weekend. It was a great time and it had been a long time since just Hayden and I traveled together for a race. I really enjoyed getting to go and help him on and off the track, it kind of gave me a glimpse of what I could do when I decide to hang up the Alpinestars leathers and Arai helmet many years from now. One thing I was doing was keeping track of his split times and lap times so he could see them when he came into the pits. I was using the MotoAmerica timing on my phone but also my stopwatch, I was challenging myself to see how close I could get the lap time compared to MA timing. I was able to have quite a few laps exactly the same.

It was also nice seeing a lot of old friends from the MotoGP paddock as well as putting faces to names to some new friends. 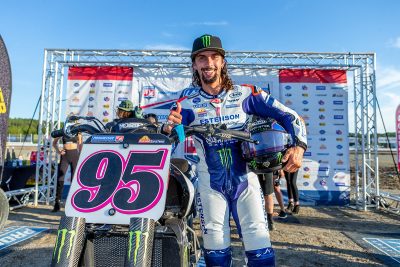 From there it was back home for a couple of days then straight to Springfield, IL for American SuperCamp. I’ve been doing these camps for 22 years now, it’s something I really enjoy again. I use to love doing them, then I think I got to that age where I thought I knew everything and didn’t like getting bossed around and had done so many camps I just didn’t enjoy it. The camps are really hard work and its none stop, so if you don’t enjoy them it makes for a long day. I finally did another one a couple of years ago and fell back in love with them and love helping Danny Walker and the crew. I think Danny was always hard on me but it was for my own good and taught me a good work ethic. Now I get a bit more freedom at the camps. I can get up every morning and go for a 30 min run and get ready then be at the camp before everyone gets there. I challenge myself at these camps to never sit down and to stay off my phone while I’m working. When you see (World Famous) Robbie Peterson working as hard as he does it inspires you to work your ass off!! It’s no secret that I stutter, so at these camps I make myself talk as much as possible to try and get better at speaking to groups.

From there it was home for a couple of days then straight to Missouri for the next American Flat Track event. It wasn’t our best event of the year and the weather made for a very strange weekend and minimal track time. We were able to still bring home a 5Th place so it wasn’t horrible. Right after that weekend, we did an outlaw race at Lima, OH to get some track time before the national coming up.

After that race, it was when things got busy/slow all at the same time. I had been struggling since last year with a little arm pump but also my hand going asleep. I just figured I wasn’t training or riding enough or just not working hard enough, so I just did more. But it never seemed to help, so it was time to try something different. We had a four-week break until the next race. I called Dr. Tom Bryan in California who usually does my surgeries and told him what was going and he told me what he thought it was but it was hard without him being able to actually see me. This was on a Monday, so when I hung up the phone with him I packed up a bag and booked a flight to LA while driving to the airport. Tuesday morning, Dr. Bryan got me in first thing to look at my wrist and schedule surgery for Wednesday at 7 am. Luckily my buddy Jon Heinen lives close by so after taking an Uber to surgery, Jon took me back to my hotel after the surgery. At the hotel, I took a nap, ate some food, and took some Aleve then headed back to the airport and booked a flight home that night. 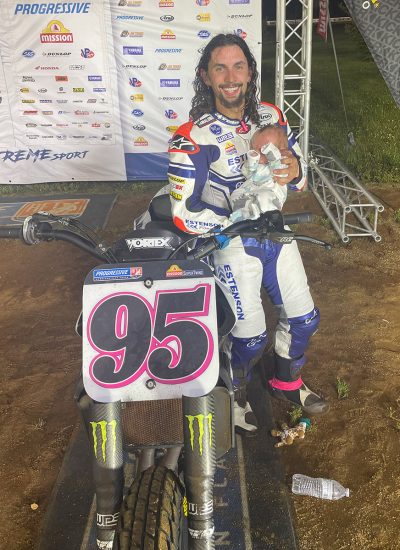 I ended up getting carpal tunnel surgery so which put me out from using my right hand for three weeks. Dr. Bryan cleared me to do a test day at the Du Quoin Mile the weekend before the next American Flat Track race. It went well but we didn’t get a ton of time on track before the rain hit.

From there it was to my home race in Kentucky at the Red Mile. It was a weekend full of highs and lows, but it was the best I’ve ever felt on a mile. I did get to wear a specially painted Arai helmet done by AP Designs to honor Earl and Nicky Hayden which turned out amazing. I was hoping to get a win with it but on day two I was able to at least get on the podium with a third. It made it a little more sweet because Frankie Lee and Madeline were there with newly born baby FLG so I at least got to get pictures with him on the podium.

With how good I felt on the bike but broke while leading the first night about 8 laps into the main at least my teammate Dallas Daniels got the win. He rode a great race and got a win on the Mile as a rookie which is pretty special. 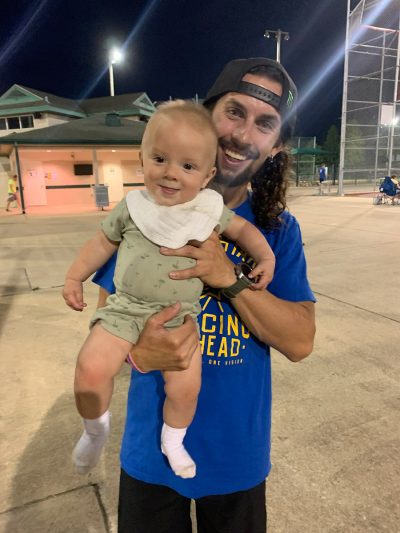 That gave me a bit of extra motivation going into the next race. At the Laconia, NH Short Track it was a bit of an unknown for us. AFT’s last race there was in 2019 but I wasn’t full-time in the series yet so I wasn’t there, also since then the track had gotten a new clay surface. Again weather played havoc on the race weekend. Making the little Short Track one of the roughest tracks I’ve ridden but I was determined to win.

My crew chief Dustin Say gave me a great bike all day, we were on rails. I could ride as hard as I wanted to and just plow into every hole on the track. We had a perfect day, winning the heat, winning the Mission’s Foods dash for cash, then winning the main event by four seconds. It was a great feeling to finally win a national on an oval.

Now that the wrist/hand is all better it’s made racing a lot more enjoyable. Between the races, it’s been the normal training and riding. With the added softball games for Frankie Lee’s work league games. Usually, I’m the reserve bench warmer but I’ve been drafted into place. I only play catcher because of my shoulder the furthest I can throw it is home base to the pitcher haha.

Up next is the Lima, OH Half-Mile. It’s one of the toughest races that we run but I’m looking forward to it!